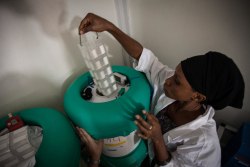 The European Medicines Agency, or EMA, has announced its conditional marketing authorization of a vaccine used to prevent the spread of the Ebola virus. University of Florida researchers played an integral role in the design and analysis of trials testing the effectiveness of the vaccine, manufactured by Merck.

Conditional authorization brings the vaccine a major step closer to licensing, which will eventually make the vaccine more widely available to protect people who are at risk of contracting Ebola.

“The conditional authorization of the world’s first Ebola vaccine is a triumph for public health, and a testimony to the unprecedented collaboration between scores of experts worldwide,” said Tedros Adhanom Ghebreyesus, Ph.D., director-general of the World Health Organization. “My deepest gratitude is to the studies’ volunteers, researchers, health workers in Guinea, other countries and the Democratic Republic of the Congo who have put themselves at risk to ensure people are protected with this vaccine.”

The announcement by the EMA, the European agency responsible for the scientific evaluation of medicines developed by pharmaceutical companies, is the preliminary step before the European Commission, the executive branch of the European Union, decides on licensing. At the same time, the WHO will move toward prequalification of the vaccine.

“My hope is that we can now integrate the vaccine and ring vaccination strategy in a seamless manner with an approved product,” said Ira Longini, Ph.D., a professor in the department of biostatistics at the UF College of Public Health and Health Professions and the College of Medicine, and a key figure in the design of the Ebola vaccine trial and the analysis of its statistical data. “This should make Ebola prevention and control even more effective than it is now and save even more lives.”

A randomized trial for the vaccine, known as rVSV-ZEBOV-GP, began during the Guinea outbreak in 2015. Longini collaborated with Natalie Dean, Ph.D., a UF assistant professor of biostatistics, and an international team working with the WHO to use a ring vaccination approach to test the new vaccine.

With ring vaccination, people in contact with those who have contracted a virus — including family members, neighbors and co-workers — receive the vaccination. It is the same approach used in the consolidation phase in the eradication of smallpox.

In findings published in the journal Lancet in 2016, the researchers reported that the vaccine is nearly 100% effective at preventing Ebola when given 10 or more days before exposure.

The strategy is being used in the current Ebola outbreak in the Democratic Republic of the Congo. More than 236,000 people have been vaccinated, including more than 60,000 health and frontline workers in the country and neighboring countries of Uganda, South Sudan, Rwanda and Burundi.

The announcement of EMA’s conditional approval will not have an immediate effect on how the vaccine is produced, accessed or administered in the Democratic Republic of the Congo. The vaccine will continue to be used under a research protocol known as “expanded access” or “compassionate use.”

Longini continues to help the WHO with vaccination strategy and further assessment of the effectiveness of the rVSV-ZEBOV-GP vaccine in the Democratic Republic of the Congo.

“We now have learned how to design vaccine trials for important infectious disease threats, like Ebola, in a way that we can assess vaccine efficacy, apply for licensure and devise control strategies all within one study design,” said Longini, a member of UF’s Emerging Pathogens Institute. “This should lead to effective control strategies using vaccines and other interventions for future outbreaks of Ebola and other infectious disease threats such as Lassa fever, MERS, Nipah virus and chikungunya.”

Jill Pease is the public relations director for the UF College of Public Health and Health Professions. She is responsible for developing public relations and communications strategies to promote the... END_OF_DOCUMENT_TOKEN_TO_BE_REPLACED