UF Health to resume elective surgeries, procedures on Monday, May 4. For more information on our ongoing response to COVID-19 in Gainesville, Jacksonville and Central Florida, visit our coronavirus website. END_OF_DOCUMENT_TOKEN_TO_BE_REPLACED

Judy Jones was a little nervous telling her University of Florida Health surgeon about her ambitious goal. She underwent open heart surgery for a faulty heart valve on Sept. 7 of last year. Exactly eight weeks later, Judy planned to participate in a Disney 5K road race. Not competitively, of course. Judy was 74, after all. It was her first such race, and she would be happy to finish ahead of the Mickey Wagon, the vehicle that picked up race stragglers so the theme park the race threaded could open afterward unimpeded by the slowpokes.

Most people might have discarded the idea of participating in a 5K — 3.1 miles on the hard pavement — upon learning their heart needed repair. But that isn’t Judy. She doesn’t quit.

What she got from her heart surgeon, George Arnaoutakis, M.D., was a dose of encouragement. “We often counsel patients to be aggressive using their legs and doing cardiovascular activity after surgery,” he said.

Judy would finish her race. She would even beat the Mickey Wagon, power walking most of the way. Turns out, Judy has heart to spare.

The story of Judy’s unwavering desire to finish that race, and the encouragement she received from her skilled and dedicated UF Health medical team, underscores the power of exercise, motivation and realistic, if ambitious, goals to speed a patient on the road to recovery.

Arnaoutakis, nurses, physical therapists and other UF Health staff realized that Judy’s real race is the one whose finish line is an independent life unaffected by a major surgery.

Judy is winning that competition.

“I realized in retrospect how important all these people were along the way who just kept encouraging me,” said Judy, who retired as a principal at Cornerstone Academy in Gainesville last June. “It was the key. If they had not been, if just a few people had discouraged me, I probably would have given up. I have such an incredible heart of gratitude toward all of the people at UF Health.”

Judy’s daughter, Debi, broached the idea of Judy running a Disney 5K after the death of Judy’s husband in September 2017 at age 74.

Judy, who admits she was never much of an athlete, hadn’t kept herself in good shape and was overweight. “I didn’t even like to run,” she said.

“We’ve got to get you in shape,” Debi, herself a runner and a physical therapist, told her, “or we’re going to lose you, too.”

Judy was game. So in February, the pair signed up to run the Disney Fall Feast 5K on Nov. 2. Judy began training in earnest, walking and running as much as she could.

Later, Judy’s daughter gave her a surprise vacation to Sweden. But as Judy walked Sweden’s sparkling scenery with her daughter in June, she just couldn’t catch her breath walking up hills. Something clearly was wrong.Life, of course, doesn’t sit still. Judy didn’t visit the doctor right away. She tried to ignore the symptoms that fell on her with increased severity. At times, she gasped for air after exertion.

Finally, she visited a doctor. She ultimately learned one of her heart valves wasn’t working properly and was allowing blood back into the heart’s atrium. This can cause a cascade of problems, including fluid buildup in the lungs.

That fluid buildup is what had been causing Judy’s difficulty breathing.

During a pre-surgery meeting, Judy told Arnaoutakis her plans to run the Disney 5K. At first, she said, he told her to wait until after the surgery to make a decision. They would need to see how things went.

Usually after a surgery like this, patients are told to avoid any heavy lifting for eight weeks. They also do not want patients to participate in any extreme exertion, such as running.

Arnaoutakis said he was not surprised at her request.

“I had the opportunity to meet Judy several times before surgery and instantly recognized she was a very motivated person,” said Arnaoutakis, an assistant professor in the UF’s College of Medicine’s division of thoracic and cardiovascular surgery.

The day after Judy’s son, Brad, accompanied her on one meeting with Arnaoutakis, Brad was hospitalized with a major heart attack. His doctor told the overweight Brad he needed to get serious about his health, Judy said.

Suddenly, two members of the Jones clan had good reason to get in shape. 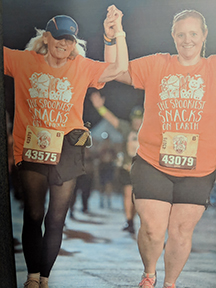 On Sept. 7, the big day came. The surgery went well. Arnaoutakis replaced Judy’s faulty heart valve. It also turned out that one of her coronary arteries was 80 percent blocked, so Arnaoutakis performed a single-vessel bypass.

Not long after surgery, a physical therapist came to walk her in the halls of UF Health Shands Hospital. Judy bluntly told him, “I’m getting ready to do a 5K.”

“Well,” he said, “this is the beginning. You need to start walking around these halls.”

So, Judy did, just a little at first with help. One foot in front of the other. Slowly.

“It was difficult to walk down the hospital hall just one time,” Judy said.

After six days in the hospital, Judy wasn’t setting any speed records. But her determination had increased her mobility. Plans to send her to a rehabilitative facility were scrapped.

She broached the idea of the Disney 5K again with Arnaoutakis. This time, he gave her the green light. But he told her running was out. She needed to walk it.

“I realized I had to get myself healthy or I was going to spend the rest of my life in doctors’ offices,” she said. “But I also wanted to show my children that I could do this. I guess I just wanted to maybe make my kids proud of me.”

Just three weeks before the race, Judy graduated to walking around her neighborhood. A path around her subdivision measured roughly 5 kilometers. Judy walked it each morning. As the race approached, she got her time down to about 17 minutes a mile.

That still might not be enough to beat the Mickey Wagon. Judy figured she needed to get down to 16 minutes.

Her daughter constantly encouraged Judy. “Mom, I really think you can do this,” she said. “Just keep walking. Keep walking.”

“As I went along, I could see that having that goal was making me improve,” Judy said.

The Disney Fall Feast 5K started at 5:30 a.m. and wound through Walt Disney World property, including part of the Animal Kingdom theme park.

She and Debi got a spot at the head of the large pack of runners, an effort to stay far ahead of the Mickey Wagon.

It was dark during the race. Judy kept her head down to keep an eye on the ground so she wouldn’t trip. Her daughter paced Judy, who power walked as fast as she could.

Toward the end, Judy was tired. But she wasn’t panting for breath as she had feared. She even passed a few slower runners along the way.

Then she came around a corner and saw the finish line. This would be the only time she didn’t follow doctor’s advice. She jogged the last 100 or so yards. She and Debi crossed the finish line, their hands clasped and raised in triumph.

“It was overwhelming,” Judy said. “I just sobbed because I had actually made the goal.”

Not long afterward, she sent an email to Arnaoutakis and his team. “I would never have been able to do this in eight weeks if your work had not been perfect. Ready to start living fully again!!!”

Arnaoutakis said Judy’s quick recovery is a testament to her determination.

“I think physical goals after surgery are very important,” he said. “We sometimes see patients that aren’t quite as motivated as Judy and that definitely slows down their recovery.”

He added, “We’re very fortunate to be in a profession to be able to offer such a meaningful impact on patients’ lives. It’s part of the mission here at UF Health to collaborate and to offer patients hope to feel better and live longer, stronger lives.”

Judy now runs every day. In fact, mother and children are all pounding the pavement. They plan to run a Disney 5K in April. Brad calls him and his mom the “cardiac kids.”

One other thing about Judy’s first race:

“I never did see the Mickey Wagon,” Judy said. “I still don’t know what it looks like.”

Bill Levesque joined the UF Health staff in May 2017 as a science writer covering the Institute on Aging and research of faculty physicians in the College of Medicine. He... END_OF_DOCUMENT_TOKEN_TO_BE_REPLACED