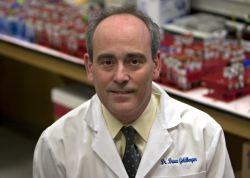 University of Florida Health forensic medicine director Bruce Goldberger, Ph.D., has been named to a White House committee whose members will identify and respond to new drug threats nationwide. Goldberger joins experts in law and drug enforcement, public health and addiction on the Emerging Threats Committee formed by the Office of National Drug Control Policy.

The illicit drug trade is evolving rapidly and now includes many new psychoactive substances, Goldberger said. Many of them are synthetic — opioids such as fentanyl, cathinones that are chemically similar to amphetamines, and synthetic cannabinoids.

“The committee will assist in the identification of emerging substances for the Office of National Drug Control Policy, so it can develop a national strategy to deal with the threat,” he said.

Goldberger, a longtime UF pathology professor and expert toxicologist, was invited by Drug Control Policy Director Jim Carroll to join the 14-member committee. Other members include the principal deputy director of the Centers for Disease Control and Prevention; the U.S. Drug Enforcement Administration operations chief; the inspector-in-charge of the Postal Inspection Service; and deputy commissioner of the Department of Homeland Security, Customs and Border Protection.

The committee held its first meeting on May 22 in Washington, D.C. It has 180 days to develop a comprehensive strategy to identify emerging drugs and list the five most urgent threats. To do that, the committee will analyze large amounts of data from public health, law enforcement, medical examiners and other sources. Goldberger’s role is to represent the medical-legal death investigation field — medical examiners, coroners and toxicologists — on the committee.

As a forensic medicine expert, Goldberger wants to emphasize to the committee that the timeliness of its decisions is crucial.

“Drugs evolve continuously. These threats must be identified and mitigated quickly to save lives,” he said.

The federal government is now more effective when it comes to drug response than it was years ago, according to Goldberger. That’s important when addressing rapidly changing drug threats such as when the Mexican cartels began the trafficking of the synthetic opioid fentanyl.

“We now have strategies to combat the drug threat at many different levels, and that includes prevention, treatment and interdiction at the border and airports,” he said.

The committee will ultimately issue its recommendations to Carroll.

“The drug threats facing the United States are constantly changing and more complex than ever before,’’ Carroll said. “It is critical we not only meet the challenges of today but also prepare to address the threats of tomorrow. By bringing together those people on the front lines of this fight, we can position ourselves to proactively respond to these threats and preserve the safety and security of American citizens.’’

Doug Bennett joined the UF Health staff in January 2015 as a science writer and editor. His topic areas include anatomy; biochemistry and molecular biology; molecular genetics and microbiology; pathology,... END_OF_DOCUMENT_TOKEN_TO_BE_REPLACED