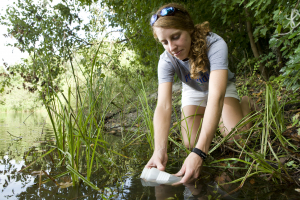 Florida’s freshwater lakes, springs and waterways are increasingly threatened by harmful algal blooms that contaminate the water and endanger the lives of aquatic plants and animals. But do toxic algal blooms pose a threat to human health as well?

With funding from the Florida Department of Health and the help of big data analytics, a team of researchers from the University of Florida and UF Health plans to find out.

“This is the first large-scale epidemiological study in Florida to examine the link between freshwater algal blooms and human diseases,” said Yi Guo, Ph.D., an assistant professor in the UF College of Medicine’s department of health outcomes & biomedical informatics.

Algal blooms in Florida have proliferated in recent years. The two major culprits include cyanobacteria, the dominant blue-green algae that bloom in Florida’s freshwater lakes and waterways, and karenia brevis algae, responsible for the recent red tides and major fish kills in the state’s coastal waters. Guo’s study focuses mainly on freshwater contamination by cyanobacteria and its potential effects on human health.

Until now, most of the research on freshwater algal blooms in Florida has focused on their causes, such as overuse of fertilizer, land use and development, and even climate change. But many questions remain about the effects of algal blooms on human health.

“Our research project will fill important gaps in our understanding of the relationships between harmful freshwater algal blooms in Florida and possible links to liver and neurological diseases in humans,” Guo said.

For example, one of the most prevalent toxins associated with cyanobacteria — microcystin — attacks the liver.

According to Guo, consumption of seafood and water contaminated with microcystin can lead to liver damage and liver disease. The toxin, which can’t be broken down by the human digestive tract, is quickly transported to the liver, where it accumulates in liver cells, causing inflammation and disrupting cell function. Ingesting large amounts of this toxin over a short period of time can lead to severe liver damage and even death. Ingesting smaller amounts over a long period of time can damage liver cells and lead to chronic inflammation and illness.

“The increasing number and size of toxic algal blooms in Florida has made exposure to microcystins a major concern for human health,” Guo said. “However, few large-scale epidemiological studies have been conducted to determine the extent of the risk to humans or the number of people who already may have been affected.”

Another potent toxin associated with cyanobacteria is saxitoxin, also known as paralytic shellfish toxin. Consuming shellfish contaminated with this powerful neurotoxin can rapidly lead to respiratory distress, paralysis and death.

Guo said this study is the first to explore the amount of yet another neurotoxin known as BMAA in Florida freshwater lakes and waterways. Studies in New England and elsewhere suggest that BMAA in algae-contaminated lakes may be an environmental risk factor for Alzheimer’s disease, Parkinson’s disease and ALS. But none of the studies has found a strong cause-and-effect link.

The UF researchers will establish current levels of BMAA in Florida’s freshwater lakes and waterways. They will also examine the role of cyanobacteria in raising freshwater BMAA levels. The study results could even provide a more definitive link between human exposure to this neurotoxin and the development of neurodegenerative diseases.

Guo leads a team that includes health outcomes researchers, epidemiologists, water quality experts and biomedical informaticians from UF’s College of Medicine, School of Forest Resources & Conservation in the Institute of Food and Agricultural Sciences, and the UF Emerging Pathogens Institute. The team plans to link limited patient data from electronic heath records in the OneFlorida Data Trust with water data from Florida LAKEWATCH and other state agencies to identify hotspots of human diseases that are potentially associated with algae blooms and cyanobacterial toxins.

Florida’s LAKEWATCH program, begun at UF in 1986, is a voluntary monitoring program that collects data on levels of nitrogen, phosphorus and other indicators of water quality for more than 150 lakes throughout the state.

The University of Florida is one of four universities funded by the Florida Department of Health to investigate the effects of toxic algal blooms on human health.

Guo said that mapping the hotspots in Florida showing unusually high rates of human diseases that are associated with harmful algal blooms could help public health agencies and policymakers make better use of their resources and efforts.

“Our study will provide the evidence needed to develop public health interventions that target harmful algal blooms in the most impacted regions of the state,” he said.