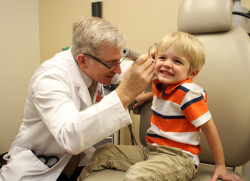 Millions of Americans each year visit their doctor for an outer ear infection known as “swimmer’s ear.” Physicians often prescribe antibiotic quinolone ear drops, which have long been viewed as safe and effective.

But a new study by University of Florida Health researchers shows quinolone ear drops might cause a perforated eardrum, which can lead to hearing loss. The study by researchers in the UF colleges of Pharmacy and Medicine is published in the journal Clinical Infectious Diseases.

Analyzing data from 94,000 children and adults with the infection, researchers found more than a twofold increased risk of a perforated eardrum among patients receiving quinolone ear drops compared with those receiving another common antibiotic ear drop containing neomycin. That equated to 38 patients with a perforated eardrum among the 43,653 who received quinolone ear drops, compared with 25 among the 50,680 who received neomycin.

The patients, upon starting treatment, had intact eardrums and no known risk factors for perforated eardrums. The infection, called acute otitis externa, is not thought to contribute to the risk of developing a perforated eardrum. It is commonly known as swimmer’s ear because the bacteria that cause it thrive in wet environments.

“The fact that our study showed any risk is significant,” said Patrick Antonelli, M.D., a professor and chair of the College of Medicine’s department of otolaryngology and a co-author of the study. “These drugs have been shown to be safe for the very delicate cells in the inner ear that are responsible for hearing and balance. So, these ear drops have been prescribed very liberally.”

He added, “These antibiotics have long been known to cause problems with soft tissues, like tendons and joints, when used orally. But there was never any serious concern given to how they would affect the soft tissues of the eardrum.”

Physicians need to be more cautious when using quinolone ear drops and might need to limit their use in some cases, the researchers said.

The risk for those perforations is rare,” said co-author Almut Winterstein, Ph.D., a professor and chair of the department of pharmaceutical outcomes and policy in the UF College of Pharmacy and director of the UF Center for Drug Evaluation and Safety. “But it is there. We need to think of the risk-benefit. Clearly, you want to treat infection. And it makes sense to treat these infections with topical ear drops. But there may be cases where the reasons for using these ear drops are not strong enough to warrant the risk.”

For example, some off-label uses of quinolone ear drops might need to be reevaluated, Winterstein said, such as when the antibiotic is prescribed in the treatment of excessive ear wax.

Researchers said the study can never rule out that unidentified differences in the comparison groups might account for the elevated risk in quinolone ear drop users. However, researchers had previously conducted a separate experiment in healthy rats that noted the same risk for eardrum perforations after administration of less than a drop of quinolone.

The current study is a follow-up to another published in 2017, which found that children receiving quinolone ear drops after ear tube surgery had a 60 percent higher risk of a perforated ear drum.

Indeed, quinolones have come under increased scrutiny in recent years because of their adverse effects on soft tissues and other issues. An advisory committee of the U.S. Food and Drug Administration concluded several years ago that the benefits of systemic quinolones might not outweigh their risks.

Quinolone ear drop use has been increasing. And they are more commonly prescribed than neomycin, which has its own risks. For example, neomycin has been known to cause hearing loss after repeated use in the presence of an eardrum perforation or an ear tube.

So, Antonelli said, it is a balancing act for doctors who must weigh risk against benefit.

“Obviously, the more often you prescribe quinolone ear drops to a patient and the longer you give it, the more likely you’re going to have a problem,” Antonelli said. “We’re not telling people not to use it. But you’ve got to be careful with its use. It’s not holy water.”

The study can be found at: https://bit.ly/2YJJdns

Bill Levesque joined the UF Health staff in May 2017 as a science writer covering the Institute on Aging and research of faculty physicians in the College of Medicine. He... END_OF_DOCUMENT_TOKEN_TO_BE_REPLACED