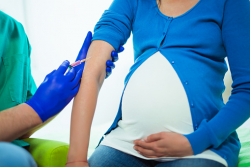 For pregnant women, getting vaccinated helps to keep themselves and their unborn or newborn child safe. But there can be barriers to receiving vaccines, such as a lack of insurance coverage. New findings by a group of University of Florida Health researchers show who is most at risk of not getting vaccines during pregnancy and why better access is crucial.

The primary authors are Taylor A. Merritt, a medical student in the UF College of Medicine, and Lindsay A. Thompson, M.D., a professor of pediatrics and health outcomes and biomedical informatics in the college. The findings were published Jan. 23 in the journal Morbidity and Mortality Weekly Report, a publication of the Centers for Disease Control and Prevention. Here, Thompson and Merritt explain some of their findings in further detail.

Why are certain vaccines crucial for pregnant women?

Vaccinations are particularly important for pregnant women because infants rely on antibodies they acquire from their mothers for protection against vaccine-preventable diseases until they are old enough to get their own vaccinations. Infants are at increased risk for diseases associated with pertussis, commonly known as whooping cough, and even death. Whooping cough is a highly contagious respiratory disease that causes uncontrolled, violent coughing and can lead to difficulty breathing. Likewise, women and their infants are more susceptible to severe illness if they get the flu. For pregnant women, certain vaccines — tetanus, diphtheria, acellular pertussis (Tdap) and influenza — reduce the risk of illnesses for them and their babies.

What are your main findings?

Women who are Medicaid recipients had lower vaccination rates for both Tdap and influenza during pregnancy compared with privately insured women. There was an important development when UF Health hospitals offered those vaccines for free to women after their children were born: Tdap vaccination rates among women using Medicaid increased from 13% during pregnancy to 51% immediately after giving birth. The same was true for influenza vaccination, although the rates were lower. This suggests that Medicaid-insured women might receive the Tdap and influenza vaccines as recommended during pregnancy if cost barriers were removed. However, vaccinating during the period immediately after giving birth is not as effective as getting these vaccinations at the recommended time.

How much did vaccination rates differ?

How was the research conducted?

We analyzed data from 341 adult women using a computer-generated, random selection from a group of nearly 7,000 women with Medicaid or private insurance who gave birth at UF Health between Jan. 1, 2016 and Dec. 31, 2018.

What do these findings suggest?

Compared with privately insured women, a significantly larger proportion of those with Medicaid received Tdap and influenza vaccines immediately after giving birth when the vaccines were available for free. That suggests that they might receive the Tdap and influenza vaccines as recommended during pregnancy if cost barriers were removed. Florida Medicaid’s lack of coverage for recommended immunizations during pregnancy may contribute to the lower vaccination rates among Medicaid-insured women in the study. (After the research concluded, the state of Florida decided in

February 2019 to cover the flu vaccine as an expanded benefit for Medicaid participants over age 21, including pregnant women.)

Doug Bennett joined the UF Health staff in January 2015 as a science writer and editor. His topic areas include anatomy; biochemistry and molecular biology; molecular genetics and microbiology; pathology,... END_OF_DOCUMENT_TOKEN_TO_BE_REPLACED