UF Health researchers explore why 45,000 Floridian superagers are so healthy 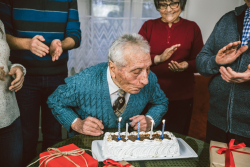 University of Florida Health scientists knew the retirement-friendly Sunshine State has its share of residents age 90 and older. But their hunch was that relatively few are largely unscathed by the infirmities of long life.

What they discovered surprised them.

An ongoing pilot study of the factors associated with successful aging in a population of those 90 and older found about 45,000 “superagers” in Florida. These are people free of Alzheimer’s, dementia or stroke, living independently with few hospitalizations or emergency room visits and generally free of disease, among other qualifiers. That is out of a population of more than 200,000 people over 90 in a state with 21 million residents.

The finding by researchers at the UF Institute on Aging; the Evelyn F. and William L. McKnight Brain Institute at the University of Florida; and the Norman Fixel Institute for Neurological Diseases at UF Health confirms that scientists are working in one of the largest laboratories on the planet as they seek to understand the underpinnings of successful aging.

“I thought making it to 90 and beyond was a pretty rare and special thing, which it is,” said Demetrius Maraganore, M.D., the B.J. and Eve Wilder professor of Alzheimer’s disease and a faculty member in the UF College of Medicine’s department of neurology. “But more than 45,000 superagers living in Florida? That’s pretty amazing.”

Maraganore and Steve Anton, Ph.D., an associate professor in the UF College of Medicine and faculty member at the UF Institute on Aging, are co-principal investigators of the Understanding Resistance, Resilience and Repair in the Health Span study, or the Over 90 study. This is one of UF’s “moonshot” initiatives, a series of ambitious projects to improve the lives of Floridians.

The Over 90 study seeks to identify people of diverse ethnic and racial backgrounds and geographic locations who are resistant to the effects of aging, as well as those who are resilient and recover from past illnesses. The investigation hopes to examine their biology, genetics, environment and lifestyle for clues about how they aged successfully.

“Nowadays, everybody wants to learn the secret of living longer and healthier,” said Anton. “And we’re on the verge of getting closer to those answers. This is an exciting research opportunity.”

Researchers are especially eager to study why some superagers are able to stave off Alzheimer’s disease, even in those cases where they have a gene that increases their lifetime risk as much as 50%. Are other genes diminishing that risk, or are other lifestyle factors involved as well?

“Can we figure out what genetic factors silence a person’s high genetic risk of Alzheimer’s disease?” Maraganore said. “What are those genes doing biologically that are turning off the other risk genes? What’s the biological protection those gene variations are conferring, and can we someday bottle that and distribute that to aging populations worldwide?”

The Over 90 study in recent months completed its first aim, which was to convene a panel of 10 UF Health experts to come up with a definition of what successful aging looks like. It is a deceptively simple question that proved harder to answer than expected, Maraganore said.

The panel could only unanimously agree on a few criteria, which it defined as being free of Alzheimer’s, dementia or related brain disorders and not living in a nursing home.

Investigators then turned to the UF Health-based OneFlorida Data Trust, a data repository of electronic health records from 15 million Floridians. It includes information on diagnoses, procedures, medications, some limited patient demographics and other elements. This information does not allow researchers to identify any individual. The trust, sponsored by the OneFlorida Clinical Research Consortium and overseen by the UF Institutional Review Board, represents research centers, hospitals and private practices across the state.

Investigators whittled the number down to 45,000 when using additional criteria for which there was general, if not unanimous agreement by the panel. Those included being free of palliative or hospice care, using the health care system infrequently, not having extremes in body mass index and not being blind or deaf, among other criteria.

The OneFlorida database does not denote if someone lives in a nursing home. That led investigators to exclude anyone living in a ZIP code where a nursing home is located. So the 45,000 figure is probably higher since researchers excluded anyone living in large swaths of cities, including Miami, Jacksonville, Orlando and even Gainesville.

“This is really a study of rural superagers,” Maraganore said. “And that’s interesting because rural Floridians are, in general, underserved in terms of health care.”

The next step researchers hope to take is to contact 500 people among the 45,000 who live in Alachua and Duval counties to see if they would consent to undergo physical and cognitive tests, in addition to genetic and other biologic studies.

If the pilot study is successful and a second, larger project eventually scales up, researchers hope to engage as many of those 45,000 superagers as they can.

Anton noted that the enormous potential pool of participants over 90 would lend greater statistical credence to genetic studies. “When you start to look at all these complex relationships,” Anton said, “you need lots of participants. We’re fortunate to have this potential opportunity.”

A further aim of the Over 90 project is to see if cognitive or physical interventions can assist this population of older adults to maintain their successful aging. Would brain exercises using software or an exercise regimen help stave off dementia?

“We need to talk to participants about the types of interventions they’re open to, would willingly participate in and would be feasible for them to do,” Anton said.

Maraganore said the vast store of data in OneFlorida offers researchers a unique opportunity to better understand how to live a long, healthy life.

"My secret desire is to find the Fountain of Youth,” he said. “Florida is the Ponce de Leon state. This is where he came, the great explorer, to find the Fountain of Youth. He didn’t, of course. But maybe we can discover why some people reach their 90s in such good health. By identifying 45,000 superagers in Florida and trying to learn how they super-aged, that to me is where the elixir of youth may lie.”

Bill Levesque joined the UF Health staff in May 2017 as a science writer covering the Institute on Aging and research of faculty physicians in the College of Medicine. He... END_OF_DOCUMENT_TOKEN_TO_BE_REPLACED