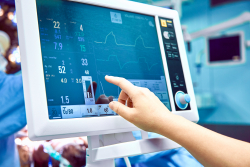 National mortality rates for trauma survivors treated in hospitals have improved over the past few years, but for about 20% of patients, recovery can be slow and compromised. Instead, they develop chronic critical illness, a state of persistent multiple organ failure that can lead to extended hospital stays, greater chances of developing other complications and poor long-term outcomes.

UF researchers wanted to know why this was happening, and if they could tell at admission which patients were most likely to be part of that 20%.

“We were interested in finding a way to determine whether or not the patient would have difficulty recovering early on, and preemptively adjust their care as needed,” said Steven Raymond, M.D., a fourth-year resident in the UF College of Medicine’s department of surgery.

Now, a new genomic test has the potential to change that.

Using data from a study funded by the National Institutes of Health, UF Health researchers were able to determine a “genomic fingerprint” for patients that would take less than 48 hours to predict who would survive their injuries and who would progress to multi-organ failure.

The test is believed to be first clinically practical precision medicine metric for severely injured patients. Caregivers may be able to predict if a patient is at risk for a dysfunctional inflammatory response and at a high risk of multi-organ failure.

“We can use the response of a trauma patient’s genes in their blood to help us predict who is going to have a complicated or uncomplicated response to being severely injured,” said Scott Brakenridge, M.D., MSCS, FACS, an assistant professor of surgery on the acute care surgery team at the UF College of Medicine.

When a body experiences a traumatic event, it mobilizes many resources to help with healing and repair. The signals the body uses to coordinate this response can travel through the nervous system or blood. In this case, the blood contains a variety of proteins and chemicals to help direct the damage response. The amount of proteins and chemicals expressed in the blood can be used to indicate whether the immune system’s response self-sabotages.

In fact, researchers identified 2,078 genes that were expressed differently between trauma patients who had a rapid recovery as opposed to those with prolonged, complicated outcomes. Out of those genes, 63 were both statistically different and distinct in their gene expression, lending researchers the ability to create the metric in question.

“One of the main challenges in severely injured patients in shock is that their host immune system overreacts,’’ Brakenridge said. This uncontrolled inflammation is what drives organ dysfunction.

In a paper published in the May issue of the Annals of Surgery, the UF researchers explain how improved identification of the patient population with complicated clinical trajectories can give providers the chance to better apply treatments like current and novel interventional therapies.

Previous clinical trials aimed at controlling the immune system’s response to trauma were unsuccessful, largely due to providers’ inability to sort out patients who were on the road to rapid recovery and those who were likely to experience complications, said Raymond, the lead author of the study.

“Immune system responses also differ between individuals, meaning the more a physician can tell about an individual’s response, the better they can determine what kind of immunotherapy agents might work,” he said. “This would allow us to target immunomodulatory interventions to severely injured patients in ways that we were not able to do previously.”