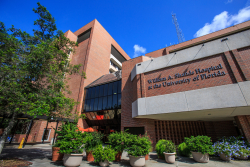 No other Florida hospital has as many adult and pediatric specialties ranked among the nation’s best as University of Florida Health Shands Hospital, with the U.S. News & World Report 2021-22 Best Hospitals survey released today again reflecting the health system’s stature as a longstanding leader in Florida and regional health care.

The news comes a month after U.S. News ranked the UF Health Shands Children’s Hospital as the best in Florida.

With eight pediatric specialties ranked nationally last month, UF Health Shands stands far ahead of any other Florida hospital in combined specialties recognized as being among the nation’s top programs.

“Every member of our team stepped up during this past, difficult pandemic year and continued to provide the life-changing care our patients have come to expect,” said David R. Nelson, M.D., senior vice president of health affairs for UF and president of UF Health. “These rankings are a reminder of the dedication and skill they bring to the job. I am extremely proud to work with them.”

In addition to ranked specialties, five UF Health Shands specialties were rated as “high performing,” meaning they were in the top 10% of all hospitals nationally scored in that specialty. Those were cancer, diabetes and endocrinology, gastroenterology and GI surgery, neurology and neurosurgery, and orthopaedics.

“A health system stands on the contributions of hundreds of faculty and staff whose talents, specialized training and deep dedication allow an environment of excellence to flourish,” said Colleen Koch, M.D., M.S., M.B.A., dean of the UF College of Medicine. “It’s a privilege to work beside so many accomplished individuals who bring the best of health care to our patients every single day.”

“To be rated among the nation’s elite in so many diverse areas just reinforces why we’re a destination hospital for patients not just in Florida but throughout the Southeast and the nation,” said UF Health Shands CEO Ed Jimenez. “Our team works hard, with extraordinary dedication and skill, to provide superlative care. Our people set the standard. Patients who trust us with their care expect nothing less.”

U.S. News this year expanded procedures and conditions ratings and eliminated some specialty rankings. For example, UF Health Shands’ nephrology specialty had been nationally ranked for 11 straight years and 15 out of the last 16 years before the medical specialty was eliminated in the 2021-22 rankings for all hospitals surveyed. Nephrology was replaced by condition ratings for kidney failure and diabetes.

The U.S. News Best Hospital rankings are based on a range of measures, including survival rates, patient safety and specialized staff across 15 medical specialties. The ratings also include survey responses from thousands of physicians.

In June, the UF Health Shands Children’s Hospital tied as the best in Florida and stood among the nation’s elite children’s hospitals with eight ranked specialties that included a first-ever top 10 ranking in cardiology and a historically high ranking in pulmonology, according to U.S. News.

Bill Levesque joined the UF Health staff in May 2017 as a science writer covering the Institute on Aging and research of faculty physicians in the College of Medicine. He... END_OF_DOCUMENT_TOKEN_TO_BE_REPLACED