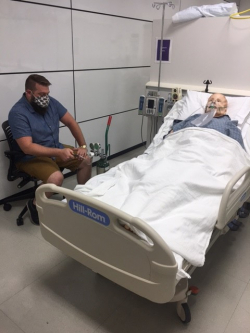 As COVID-19 ravaged India and Indonesia this spring and summer, supplemental oxygen supplies became critically scarce. For some families, that meant exhausting their life savings on a single cylinder of oxygen in a desperate effort to help loved ones awaiting a hospital bed.

With that shortage in mind, a team at the University of Florida Health’s Center for Safety, Simulation and Advanced Learning Technologies, or CSSALT, conceived a novel way to prolong the life of oxygen cylinders by reducing oxygen waste. The simple, manual technique involves intermittently interrupting the oxygen flow from the cylinder during exhalation so that oxygen flows only during inhalation. The team tested the technique on a patient simulator invented at CSSALT.

An electromechanical device called an oxygen conserver can do the same function by delivering oxygen only while a patient is inhaling and shutting off the flow during exhalation. But few oxygen conservers are available in developing nations, resulting in continuious oxygen flow that depletes supply without benefitting patients.

The CSSALT team programmed the human patient simulator to replicate a COVID-19 patient’s rapid breathing and poor gas exchange. Three participants manually crimped the oxygen tubing with pliers to halt oxygen flow during each exhalation. The goal was to prolong the bottled oxygen supply while still providing better oxygen delivery than room air.

The results are promising: In the simulator, the intermittent oxygen-pinching technique decreased oxygen use by approximately 60% compared with continuous oxygen flow. Three indicators of oxygen supply were improved compared with breathing room air, although they were lower than breathing continuous supplemental oxygen.

“We found that when we manually imitated an oxygen conserver, this technique reduced oxygen use while simultaneously improving oxygen saturation,” said Sem Lampotang, Ph.D., the Joachim S. Gravenstein Professor of Anesthesiology in the UF College of Medicine’s department of anesthesiology and the CSSALT director.

Due to the dire situation in India, a description of the technique and other relevant material were quickly posted on the CSSALT website so that it could be swiftly disseminated. A report describing the experiments performed on the simulator has been accepted for publication in the journal Simulation in Healthcare.

The team was able to quickly pass the data along to colleagues in India so they could independently evaluate it and decide whether to use the technique, which has not been approved by any regulatory body. The project started when Lampotang was contacted in late April by Jeffrey Feldman, M.D., an anesthesiology and critical-care professor at the University of Pennsylvania and Children’s Hospital of Philadelphia as well as a former UF anesthesiology faculty member. After being approached by a physician in India seeking help with the oxygen shortage, Feldman turned to Lampotang. It was Lampotang who led a team of engineers in designing a low-cost, open source ventilator during the early months of the pandemic.

Lampotang’s team acted fast. Just more than a week later, he sent Feldman the link to the CSSALT webpage, asking that it be forwarded to the physician in India.

The next morning, the physician in India sent a brief email indicating that he had already tried the oxygen-pinching technique on his patients.

“I am already advising caregivers,” the physician wrote in early May. “It actually helps.”

The physician later told Feldman he had advised hundreds of people on the technique and all said that it improved oxygen use.

CSSALT engineers who tried the pinching on a simulator found the process repetitive but not tiring, Lampotang said. Prior experiments indicated that using pliers was less fatiguing and provided better flow interruption than using hands and fingers.

Lampotang described the technique as a stopgap measure. In many countries facing acute oxygen shortages, the situation has been so dire that there was no time to await international aid. With the new technique, all that is required is a pair of pliers.

“A huge number of people could potentially benefit,” Lampotang said.

For complete details about the technique and visualizations, visit https://simulation.health.ufl.edu/2021/05/03/conserving-oxygen-by-manually-pinching-off-the-supply-during-exhalation/.