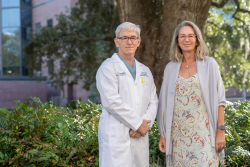 Imagine a doctor prescribing antibiotic ear drops called quinolones to treat an ear infection. The patient, who does not play sports, painfully ruptures an Achilles tendon a couple of weeks later, perhaps while simply walking across the living room.

Few would link those ear drops to the injury. It defies common sense.

University of Florida Health researchers, however, used data from 1.5 million Americans to demonstrate a small but not inconsequential risk of tendon ruptures after the use of quinolone ear drops, among the most commonly used medicines to treat ear infections.

In a paper published last month in the journal Clinical Infectious Diseases, the scientists found a more than four-fold heightened risk of an Achilles tendon rupture after use of quinolone ear drops, compared with other antibiotics.

The risk of ruptures in all types of tendons was more than 1.5-times higher, the study noted. (A rupture involves a partial or complete tear in a tendon, which connect muscles to bones. Ruptures usually occur during vigorous exercise, such as when playing a sport, or because of a fall.)

“It’s kind of hard to imagine that something you administer to the ear would affect the body in a fairly significant way,” said Patrick Antonelli, M.D., study co-author and a professor in the UF College of Medicine’s department of otolaryngology. “Patients need to be counseled about such risks. And those risks must be weighed for each individual and each indication.”

An “indication” is a medical term for a condition that a drug is meant to treat.

The researchers used a national database of private health insurance claims for patients ages 19 to 64 years. The study collected data from patients who had received a diagnosis of an ear infection or inflammation from 2005 to 2015 and had been treated with either quinolone ear drops or other antibiotics.

An association with tendon ruptures was seen with the quinolone ear drops, but not with the other antibiotics.

While it is important to recognize the risk, it should also be understood that the side effect is uncommon, said Antonelli and the paper’s senior author, Almut Winterstein, Ph.D., a professor and chair of the UF College of Pharmacy’s department of pharmaceutical outcomes and policy.

For example, that more than four-fold increased risk of an Achilles tendon rupture amounts to 6.17 cases per 100,000 patients.

“The incidence is low but elevated,” Winterstein said. “Our study shows that quinolone ear drops have enough of a systemic presence to affect other distant parts of the body, which sounds unbelievable because a topical application in the ear is such a low dose.”

In recent years, oral quinolones have been under scrutiny because of their adverse effects on soft tissues and other issues. An advisory committee for the U.S. Food and Drug Administration concluded last year that the benefits of oral quinolones might not outweigh the risks in certain instances. The committee also highlighted the need for understanding the safety of topical applications of quinolones on soft tissues, such as the ear.

Winterstein and Antonelli have shown in previous studies that the risk of a perforated eardrum is significantly higher in children and adults who received quinolone ear drops compared with groups that received alternative, non-quinolone antibiotic ear drops.

Just how a low dose of quinolones ear drops affects seemingly unrelated tissue remains unclear. To be sure, scientists had seen tendon and joint problems in patients taking larger, oral doses of quinolones to treat a number of ailments, including urinary tract infections and sinusitis.

But at a comparatively minuscule dosage in ear drops?

“There are different perspectives on this question,” Antontelli said. “But we don’t know with confidence how such a small dose creates such a big problem.”

One hypothesis involves a cascade of cellular-level impacts after the antibiotic, absorbed into the body, damages mitochondrial DNA in affected tissue.

The mystery, however, remains unsolved.

Antonelli began focusing on this oddity after an animal study his team previously conducted produced an unusual result. Quinolones were applied to one eardrum in rats that had both eardrums perforated. The opposite ears, untreated, served as controls. As anticipated, the eardrums treated with quinolone drops were slower to heal than ears treated with saline. However, the opposite ear was also slow to heal.

Antonelli and his team initially discounted this finding, thinking it might be tied to a steroid. Quinolone antibiotics often contain steroids, which help reduce inflammation.

“After thinking about this a little longer, we started to think, ‘Well, how do we really know that’s the steroid? How do we know it’s not the quinolone going to the other side? Wow, could this be a systemic affect?’” Antonelli said.

Proving that, Winterstein and Antonelli said, takes big data and could not be accomplished even in a clinical trial with hundreds of patients, given how infrequently the side effect is seen.

The UF Health team said more research is needed, including looking at what characteristics might make someone more susceptible to these quinolone-related tendon ruptures.

Patients — and even many doctors — might be forgiven if they fail to make the connection between that ruptured Achilles tendon and a few antibiotic drops applied to their ear.

Winterstein and Antonelli want to spread the word so that medical professionals and their patients can make a proper risk-benefit decision. For example, does it make sense to prescribe a non-quinolone alternative for an athlete?

“Nobody’s anticipating these effects,” Antonelli said. “It’s really out there. Doctors aren’t counseling patients, ‘Don’t run and jump. Watch your activities’ in the weeks after they use these ear drops.”

Bill Levesque joined the UF Health staff in May 2017 as a science writer covering the Institute on Aging and research of faculty physicians in the College of Medicine. He... END_OF_DOCUMENT_TOKEN_TO_BE_REPLACED