Uterine fibroids are tumors that grow in a woman's womb (uterus). These growths are typically not cancerous (benign). 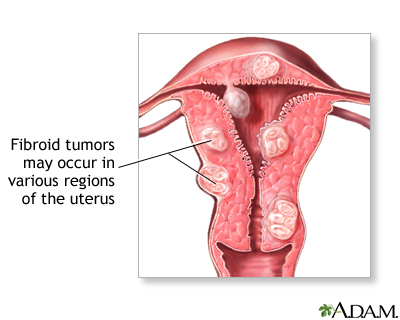 Uterine fibroids are common. As many as one in five women may have fibroids during their childbearing years. Half of all women have fibroids by age 50.

Fibroids are rare in women under age 20. They are more common in African Americans than White, Hispanic, or Asian women.

No one knows exactly what causes fibroids. They are thought to be caused by:

Fibroids can be so tiny that you need a microscope to see them. They can also grow very large. They may fill the entire uterus and may weigh several pounds or kilograms. Although it is possible for just one fibroid to develop, most often there is more than one.

Common symptoms of uterine fibroids are:

Often, you can have fibroids and not have any symptoms. Your health care provider may find them during a physical exam or other test. Fibroids often shrink and cause no symptoms in women who have gone through menopause. A recent study also showed that some small fibroids shrink in premenopausal women.

Your provider will perform a pelvic exam. This may show that you have a change in the shape of your womb.

Fibroids are not always easy to diagnose. Being obese may make fibroids harder to detect. You may need these tests to look for fibroids: 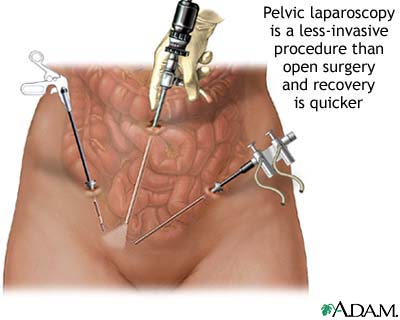 What type of treatment you have depends on:

Treatment for the symptoms of fibroids may include:

Medical or hormonal therapies that may help shrink fibroids include:

Surgery and procedures used to treat fibroids include:

Newer treatments, such as the use of focused ultrasound, are being evaluated in clinical studies.

If you have fibroids without symptoms, you may not need treatment.

If you have fibroids, they may grow if you become pregnant. This is due to the increased blood flow and higher estrogen levels. The fibroids usually return to their original size after your baby is born.

Complications of fibroids include:

If you are pregnant, there's a small risk that fibroids may cause complications: