The best way to prevent the spread of COVID-19 is to get vaccinated. You can get a vaccine in many places in your community. Find a walk-up location or schedule an appointment today. END_OF_DOCUMENT_TOKEN_TO_BE_REPLACED

In late fall of 2008, Gracyn DenBesten, 9 at the time, of Windermere practiced tirelessly to perfect her solo to “Away in a Manger” for her church’s Christmas show. But unbeknownst to Gracyn, she soon would have to forego her holiday spectacle and prepare for the role of a lifetime – becoming a fighter.

In mid-December of that year, Gracyn started to feel ill with what was assumed to be a common cold. As her condition worsened, Gracyn’s mother, Robin, scheduled an appointment with a pediatrician who reassured them that Gracyn’s cold would pass. Gracyn was given antibiotics and breathing treatments, and sent home to rest. However, three days later, on the morning of Christmas Eve, Gracyn became lethargic, fatigued and short-winded.

With no time to spare, Robin brought her back to the pediatrician for treatment of what Robin thought was now pneumonia. Upon examination, doctors noticed an unusual change in Gracyn’s condition – her heart was distressed. Gracyn was rushed to the emergency room of the local hospital where physicians performed an echocardiogram, a test that monitors the heart. Kris, Gracyn’s father, met them at the emergency room, where physicians discovered a blood clot in her left ventricle. Gracyn was diagnosed with viral myocarditis, a condition where a virus settles in the heart leaving it weak and unable to function normally.

One of three outcomes happen with the condition, Robin was told. A third of these patients will pull through without surgery but will live with complications, a third will need a transplant, and a third will not survive.

Gracyn immediately was moved to the hospital’s cardiovascular unit and placed on an IV to monitor which path her body would choose. As physicians waited for results and conducted their evening rounds, Robin rushed home to meet her in-laws and see her sons, Cole and Brooks, on Christmas Eve. But not long after Robin returned home, she received a call from Kris that Gracyn’s condition had declined. Gracyn was intubated and placed on ECMO, a machine that allows the heart to rest while it pumps blood for the heart in the short-term.

Doctors told the DenBestens that the only chance for Gracyn’s survival in the long-term was to transport her to UF Health Shands Children’s Hospital in Gainesville and place her on the Berlin Heart® Ventricular Assist Device, a machine that acts as a bridge to heart transplantation. Two days after Christmas, Gracyn was airlifted, with a physician and nurse alongside, to UF Health Shands Children’s Hospital.

Upon arrival at UF Health, Gracyn was admitted to the pediatric intensive care unit, or PICU, and assessed by Mark Bleiweis, M.D., the director and chief of congenital cardiothoracic surgery at the UF Health Congenital Heart Center, and F. Jay Fricker, M.D., a pediatric cardiologist at the UF Health Congenital Heart Center. It was determined that Gracyn would be placed on the Berlin Heart® as she awaited her new heart.

During an 11-hour surgery, Bleiweis and his team successfully implanted the device, but there were complications. Doctors feared that Gracyn suffered a stroke during her surgery when a blood clot traveled to her brain. She had temporary paralysis on her right side but did not have other neurological setbacks.

Gracyn’s family prayed for a positive outcome as doctors began to wean her off medications. Amazingly, her body started to recover days after her surgery.

“It was just miracle after miracle,” Robin said. 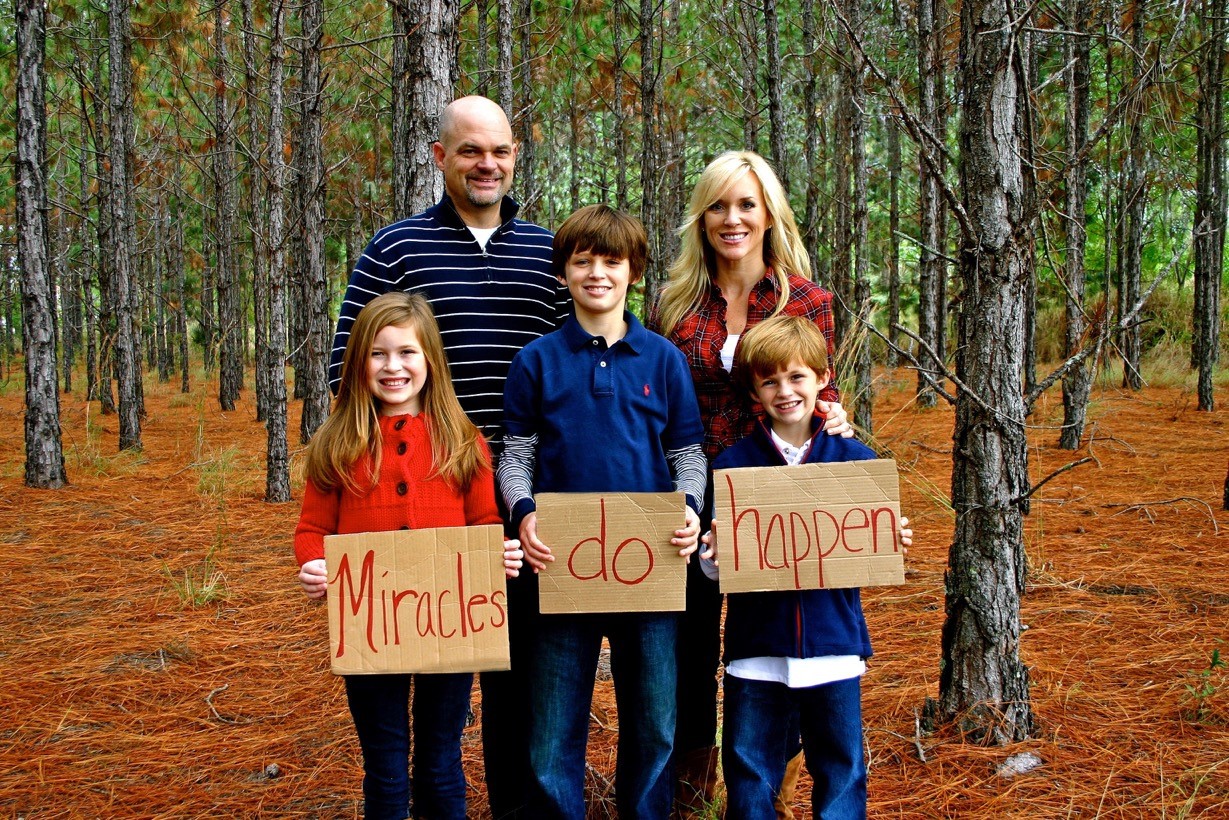 As weeks passed by in the new year, Gracyn remained in the hospital waiting for her new heart. “She would ask, ‘When is the heart coming for me?’” Robin said. “The response ‘soon’ starts to get old really quick.”

During her extended stay in the hospital, Gracyn had many medical procedures and other life threatening events, including a seizure. Through it all, Gracyn remained resilient and determined to persevere.

On the night of April 15, shortly after Easter, Robin received a call from UF Health. It was about Gracyn’s new heart.

“I said to Gracyn, ‘They found a heart for you,’” Robin said. “Our family prayed right then and there. We prayed for the family that was losing a child. Gracyn said in her prayer, ‘Lord, thank you for this heart and please be with this family.’”

At around 5 a.m. the next day, Gracyn was brought back from surgery with her new heart and her second chance at life.

“Coach Meyer was so touched by Gracyn’s story that he brought his 16-year-old daughter to meet her,” Robin said.

As Gracyn became comfortable with her new heart, physicians were continually blown away by her improvements. Unfortunately, the night before her anticipated discharge date, Gracyn experienced mild rejection, a common condition for transplant patients where immunosuppressant medications need readjustment. Gracyn’s stay would be extended at the hospital until her medication was fixed to resolve the rejection.

At last, 125 days since her arrival at UF Health Shands Hospital, Gracyn was allowed to go home.

“It was a great homecoming,” Robin said. “Our cul-de-sac was filled with family, friends and well-wishers who supported us through our journey.”

Eight years later, Gracyn is a thriving 17-year-old who has shared her story on television and with other children going through similar medical procedures. In the future, she aspires to attend the University of Florida where she will be close to her heart family at the Congenital Heart Center.

The UF Health Congenital Heart Center, consistently ranked among the top programs of its kind in the U.S., is celebrating 10 years of healing hearts.