For more information on our ongoing response to COVID-19 in Gainesville, Jacksonville and Central Florida, visit our coronavirus website. END_OF_DOCUMENT_TOKEN_TO_BE_REPLACED

Something remarkable: A teen celebrates Thanksgiving with his new lungs 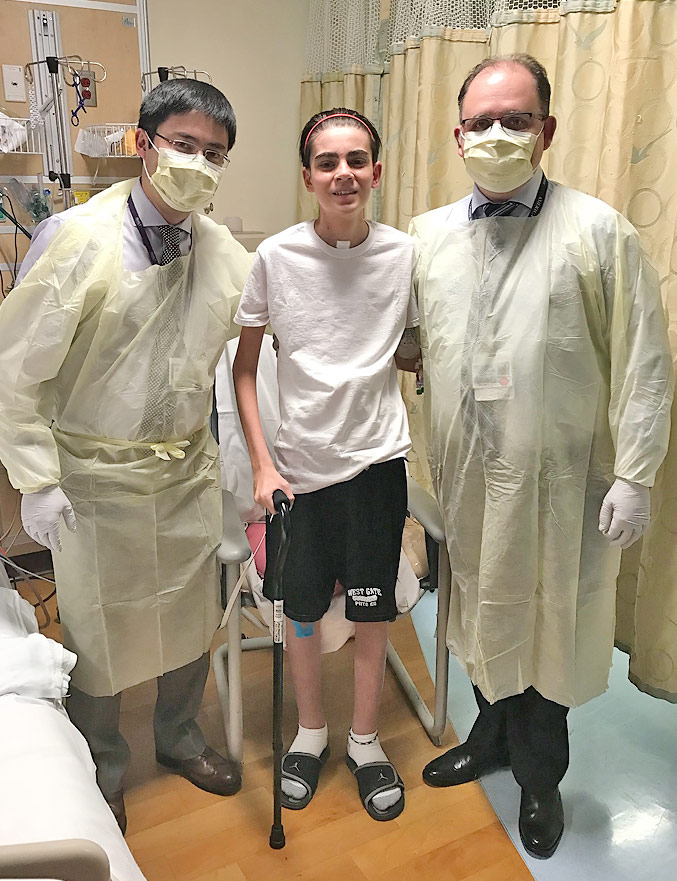 At any other time, Matias Cozzi, might have enjoyed Thanksgiving like any 17-year-old. Perhaps he’d overindulge in turkey and pie during an uneventful holiday in the happy company of family. Then he might sneak off to play a little soccer with friends.

But this is not an ordinary Thanksgiving for the teenager.

It’s a time to enjoy the love of a family that never gave up and to give thanks to the supporters and friends and the medical professionals who helped ensure something remarkable.

“The whole family is going to come up to celebrate with us,” said Andrea Cozzi, Matias’ mother. “We are very happy and lucky for the blessing of our family. With their support and courage, they helped us keep fighting and keep hoping. We have lots to give thanks for.”

In August 2017, Matias started to cough up an unusual amount of blood. Matias, who has been living with cystic fibrosis, or CF, most of his life, had grown accustomed to coughing up blood on occasion. Overall, he managed his CF around the clock with a combination of pills, four nebulizer treatments each day, therapies and an active lifestyle through soccer. However, during the summer, Matias noticed unusual changes in his health.

“I got really sick once and didn’t go back to soccer,” Matias said. “That’s when it started getting worse and worse.”

On August 6, Matias’ father, Ed, and Andrea Cozzi, took their son from their home in Port St. Lucie, Fla., to St. Mary’s Medical Center in West Palm Beach about 50 miles to the south. Physicians suspected that Matias might be dealing with something more serious than ever before. They recommended that Matias be taken to specialists at UF Health Shands Children’s Hospital in Gainesville for further evaluation and to have a minimally invasive procedure to plug the bleeding arteries in the lung.

Matias was air-lifted to Gainesville for further assessment on the night of Aug. 6, and met Michael Tsifansky, M.D., a pediatric pulmonologist and medical director for the UF Health Pediatric Lung Transplant program. That same night, Tsifansky raised the idea of lung transplantation.

“Matias was so positive. He really wanted his lungs,” Andrea Cozzi said. “I was so scared. I had hoped that this wasn’t going to happen.”

Matias, one of the couple’s three children, was the only one born with CF, a condition that progressively worsens and attacks the respiratory system in addition to other organs. In severe cases, patients with CF often require a lung transplant.

Unfortunately, Matias was not yet a candidate for the lung transplant wait list. The process and preparation for becoming a lung transplant recipient are rigorous. Steps to get on the list include showing adequate physical strength, good nutritional status and emotional determination. And while patients need to be sick enough to need a transplant, they also need to be well enough to heal afterward.

Under the observation of Tsifansky and Mutasim Abu Hasan, M.D., a pediatric pulmonologist at UF Health, Matias was admitted to the pediatric intensive care unit. He underwent a second procedure to stop the bleeding in his lungs, but the arteries leading to his left lung became obstructed and collapsed. Doctors quickly removed the obstruction. An hour later, the other lung collapsed.

“In those moments, every day took so long. Now, looking back at it, it went by fast,” Andrea Cozzi said.

As Matias’ condition continued to deteriorate, time was of the essence to get him on the transplant wait list.

Matias has grit in spades, but was so weak and malnourished that even if put on the list, his chances of surviving until transplant — and through the procedure itself — would be extremely low. To make his situation worse, Matias developed respiratory failure and pneumonia. His lungs were failing and despite a ventilator, they were not capable of keeping him alive.

Biding for time, Tsifansky and the pediatric intensive care unit team reached out to Tiago Machuca, M.D., Ph.D., a thoracic surgeon and surgical director of the UF Health Pediatric Lung Transplant Program, to see whether Matias would be a candidate for a life-saving, temporary, device serving as an artificial lung machine. It’s called extracorporeal membrane oxygenation, or ECMO, life support that put oxygen in the blood and taking out carbon dioxide.

ECMO was now the only option to keep Matias alive until a transplant.

Machuca and his team connected him to the artificial lung. As a result, Matias was now awake and no longer dependent on a mechanical ventilator. There was only one caveat — the pneumonia would continue to worsen, so doctors had a limited window to get Matias stronger and listed for a lung transplant.

“They told Matias, you have to walk and sit to show that you are strong enough,” Andrea Cozzi said.

The team and the family elected to pursue ECMO in hopes that Matias’ strength and weight would improve enough to get him on the list. Slowly, Matias started sitting, walking and gaining weight.

But as the first two weeks passed by, his condition worsened, and he began to bleed from his airways and lungs. Tsifansky and Machuca continued to closely monitor Matias and realized that even on ECMO, time was running out faster than expected.

“By that point, Matias and the family had been through so much and showed such courage, determination and will to survive, that even though we knew his condition was worsening, we decided to place Matias on the transplant list,” Tsifansky said.

“What we were able to experience over those two weeks gave us the confidence that, if we were going to push medical and surgical limits, Matias was the perfect candidate,” Machuca said.

Now, a second battle began: the wait for new lungs. Fortunately, Matias was at a hospital that is determined to shorten wait times for lung transplantation in adults (an average wait time of three months instead of six) and children.

At that point, doctors estimated that the ECMO machine would not be able to support him for more than 48 hours. But even then, Matias, his family, and the team were committed on doing everything necessary to get to the transplant and do well afterwards.

“I remember the day prior to my transplant when I had to walk at least 10 steps to show Dr. Tsifansky I was strong enough for a transplant but that’s all I remember,” Matias said. “I had people around me trying to support me to walk a certain number of steps.”

They would try to challenge him to see if he was determined to have a pair of lungs,” Andrea Cozzi said. “They don’t want to give lungs to a patient who isn’t going to fight for those lungs.”

Then, two days after being placed on the wait list, doctors discovered that they had a donor.

“I remember Dr. Tsifansky saying, ‘Those are the lungs for Matias,’” Andrea said. “He said to Matias, ‘Give me two hours, they are going to get those lungs for you.’”

Time, however, was nearly exhausted. In less than 24 hours, ECMO would stop working. The moment had arrived for Matias to demonstrate his physical strength and show he could walk and sit on his own.

Matias pushed forward to achieve both physical goals with the help and encouragement of family and multiple team members.

"I had people around me trying to support me to walk a certain number of steps,” Matias said.

“They would try to challenge him to see if he was determined to have a pair of lungs,” Andrea Cozzi said. “They don’t want to give lungs to a patient who isn’t going to fight for those lungs.”

One by one by one the steps came. Which each, Matias displayed fight to spare. He did it.

The family, including siblings, grandparents and extended family, waited for Matias to receive his new set of lungs. Matias’ father would also celebrate his birthday on the same day as his son’s new start to life.

The surgeons arrived to the waiting area to give the family the news. The operation was a success and Matias was stable.

"To me, post-transplant was the hardest because I had to learn everything. I couldn’t talk. I couldn’t eat. I couldn’t drink,” Matias said. “I went through a lot of rough times. But I had my family."

Matias regained his strength nearly a month and a half after the surgery.

"Now that I’m getting stronger, I can walk and move myself in bed. Before, I couldn’t move my hand,” Matias said. “I feel good. I don’t feel pain."

Matias’ next goal was to be discharged before Thanksgiving. With the same determination that helped him achieve those handful of steps, Matias achieved this goal, too.

He was discharged from post-transplant recovery on Nov. 20 and has begun the rehabilitation process also at UF Health Shands Hospital. That will take at least three months more.

"We thought when we came to Gainesville that we were going to start the process of transplant,” Andrea Cozzi said. “This hospital was excellent for us and for him. The way they treated us and him — unbelievable."

As a result of Matias’ transplant, his daily maintenance medications will soon be only a few pills. He hopes he will be able to play soccer again months down the road.

"Before all of this, I stopped playing soccer because I couldn’t physically do it,” Matias said. “Now that I have new lungs, I want to do the things I couldn’t like go on bike ride and go outside."

Family from throughout Florida will make the trip for a big Thanksgiving at the rehabilitation housing where Matias is staying with his parents. Matias will have his favorite holiday meal.