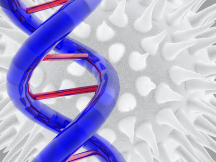 Ebola is a severe and often deadly disease caused by a virus. Symptoms include fever, diarrhea, vomiting, bleeding, and often, death.

Ebola can occur in humans and other primates (gorillas, monkeys, and chimpanzees).

The Ebola outbreak in West Africa that began in March 2014 was the largest hemorrhagic viral epidemic in history. Almost 40% of the people who developed Ebola in this outbreak died.

The virus poses a very low risk to people in the United States.

For the most up-to-date information, please visit the Centers for Disease Control and Prevention's (CDC) website: www.cdc.gov/vhf/ebola.

Ebola was discovered in 1976 near the Ebola River in the Democratic Republic of the Congo. Since then, several small outbreaks have occurred in Africa. The 2014 outbreak was the largest. The countries most affected in this outbreak included:

Ebola has been previously reported in:

In August 2018, a new outbreak of Ebola occurred in the Democratic Republic of the Congo. The outbreak is currently ongoing.

For the latest information on this outbreak and on Ebola in general, visit the World Health Organization website at www.who.int/health-topics/ebola.

HOW EBOLA CAN SPREAD

Ebola does not spread as easily as more common illnesses such as colds, the flu, or measles. There is NO evidence that the virus that causes Ebola is spread through the air or water. A person who has Ebola CANNOT spread the disease until symptoms appear.

Ebola can ONLY spread between humans by direct contact with infected body fluids including but not limited to urine, saliva, sweat, feces, vomit, breast milk, and semen. The virus can enter the body through a break in the skin or through mucous membranes, including the eyes, nose, and mouth.

Ebola can also spread by contact with ANY surfaces, objects, and materials that have been in contact with body fluids from a sick person, such as:

In Africa, Ebola may also be spread by:

Ebola does NOT spread through:

Health care workers and people caring for sick relatives are at high risk for developing Ebola because they are more likely to come in to direct contact with body fluids. The proper use of personal protective equipment PPE greatly reduces this risk.

The time between exposure and when symptoms occur (incubation period) is 2 to 21 days. On average, symptoms develop in 8 to 10 days.

Early symptoms of Ebola include:

A person who does not have symptoms 21 days after being exposed to Ebola will not develop the disease.

There is no known cure for Ebola. Experimental treatments have been used, but none have been fully tested to see if they work well and are safe.

People with Ebola must be treated in a hospital. There, they can be isolated so the disease cannot spread. Health care providers will treat the symptoms of the disease.

Treatment for Ebola is supportive and includes:

Survival depends on how a person's immune system responds to the virus. A person also may be more likely to survive if they receive good medical care.

People who survive Ebola are immune from the virus for 10 years or more. They can no longer spread Ebola. It is not known whether they can be infected with a different species of Ebola. However, men who survive can carry the Ebola virus in their sperm for as long as 3 to 9 months. They should abstain from sex or use condoms for 12 months or until their semen has twice tested negative.

Long-term complications can include joint and vision problems.

Call your provider if you have traveled to West Africa and:

Getting treatment right away may improve the chances of survival.

A vaccine (Ervebo) is available to prevent Ebola virus disease in people who live in the most at-risk countries. If you plan to travel to one of the countries where Ebola is present, the CDC recommends taking the following steps to prevent illness:

Health care workers who may be exposed to people with Ebola should follow these steps: