For more information on our ongoing response to COVID-19 in Gainesville, Jacksonville and Central Florida, visit our coronavirus website. END_OF_DOCUMENT_TOKEN_TO_BE_REPLACED

Striving to carry on the legacy of psychiatrist Richard Christensen, who lived to serve 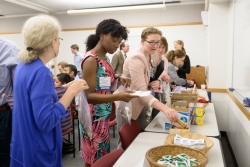 Christensen, 60, was killed on Thanksgiving Day when he was struck by a driver while on a morning run in Zambia, where he was volunteering on a Habitat for Humanity build.

Michael L. Good, M.D., dean of the University of Florida College of Medicine, addressed the gathering, which included Christensen’s widow, Kathy, and colleagues from both Gainesville and Jacksonville, where Christensen served as director of behavioral health services at the Sulzbacher Center and oversaw clinical services in two psychiatry clinics. Psychiatric street outreach work was part of Christensen’s passion.

“Dr. Richard Christensen was a man who dedicated his life’s work to caring for the less fortunate, especially the homeless and especially those suffering from some of the most severe and most complex and intertwined mental health and medical problems,” Good said.

Christensen did it with an integrated approach — integrated psychiatry and primary care — in a way that was ahead of his time and in some of the most challenging environments, Good said.

“As physicians, most of us wait in our offices for patients to queue up in waiting rooms,” he said. “Dr. Christensen brought his care to his patients.”

He received the College of Medicine’s highest teaching honor, the Hippocratic Award, in 1996 and again, posthumously, on May 3. He was named an Exemplary Teacher for three consecutive years beginning in 2011.

Regina Bussing, M.D., interim chair of the department of psychiatry, presented a personalized UF insignia chair to Kathy Christensen and spoke of the need to carry on Christensen’s mission. Recruitment is currently underway for two UF psychiatry faculty positions in Jacksonville to deliver services at the Sulzbacher Center and teach a new generation of physicians.

“What a unique opportunity to do this work,” Bussing said.

It takes just the right kind of person, colleagues said.

“Of course, just like anyone, he could recognize all of the difficulties in the systems that we work in, but he always seemed to be able to rise above that,” Hobbs said.

“The compassion he had for his patients was just amazing,” said Ana Turner, M.D., an adjunct clinical assistant professor of psychiatry, tears filling her eyes. Turner met Christensen as a student and he became her mentor. Now, she is driving from Gainesville to Jacksonville one day a week to cover his clinic.

“I had one patient tell me, ‘It was like losing my own father,’ ” she said.

Michelle Koidin Jaffee is the Science Writer for the McKnight Brain Institute of the University of Florida. In more than 20 years as a journalist, she worked as a reporter... END_OF_DOCUMENT_TOKEN_TO_BE_REPLACED