The best way to prevent the spread of COVID-19 is to get vaccinated. You can get a vaccine in many places in your community. Find a walk-up location or schedule an appointment today. END_OF_DOCUMENT_TOKEN_TO_BE_REPLACED

Robert Kuemmerlein suffered from progressively worsening shortness of breath, even when engaged in simple activities like walking to the mailbox or going up a few stairs. He also had trouble sleeping. These symptoms were caused by congestive heart failure due to damage of the aortic and mitral valves in his heart. At 62 years of age with a history of smoking and hepatitis C, Mr. Kuemmerlein had a number of significant medical problems, including chronic obstructive lung disease, chronic kidney disease and a history of cirrhosis that led to a liver transplant.

Mr. Kuemmerlein’s case was the focus of an active discussion at UF Health’s weekly multidisciplinary conference on patients with heart valve problems, attended by three cardiovascular surgeons, four cardiologists and numerous staff. Because of his compromised medical condition, however, the health care team was concerned that open heart surgery to repair his heart valves was risky, and even if he survived the operation, he would likely end up on kidney dialysis.

The consensus was that Mr. Kuemmerlein’s mitral valve was the major problem. Therefore, a less invasive approach was an option: instead of open heart surgery, Mr. Kuemmerlein was one of the first patients at UF Health to undergo application of a “clip” device to repair his valve, which was inserted with a catheter threaded through his blood vessels. This procedure was successfully performed at UF Health Shands Hospital by Dr. Thomas Beaver, a professor of surgery and director of the division of cardiothoracic surgery, and Drs. Anthony Bavry and David Anderson, interventional cardiologists. To help guide the clip into position, expertise in echocardiographic imaging was provided by Drs. Heather Reed, Matthew Mckillop and John Petersen. Mr. Kuemmerlein went home the following day; at his postoperative visit, he stated that he was sleeping better, with improved shortness of breath.

This approach to Mr. Kuemmerlein’s care reflects an overall trend in surgery: a transition from “open” procedures that use surgical incisions to create a large operating field to “minimally invasive” procedures that are increasingly performed in a multidisciplinary fashion. Minimally invasive surgery includes such things as laparoscopy, robotic surgery or arthroscopy for a variety of operations that used to be done by making a large incision in the chest, abdomen or joint. Insertion of needles under imaging guidance to accomplish deep brain stimulation for patients with Parkinson’s disease and other conditions would be another example. In the cardiovascular field, there is now a long history of the placement of stents in coronary arteries through a percutaneous, endovascular approach as an alternative to open heart coronary bypass procedures, and other endovascular procedures have been developed to treat aneurysms, stent arteries and retrieve blood clots. 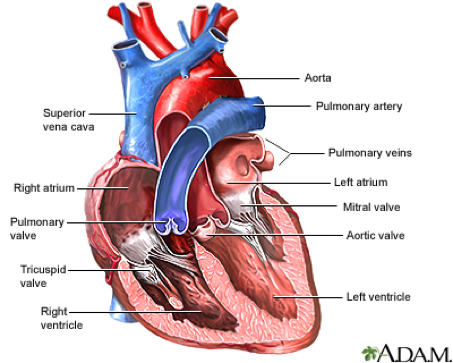 The heart contains two upper chambers (atria) and two lower chambers (ventricles). Before leaving each chamber, blood passes through a valve that prevents backward flow. The four heart valves are the:

These valves are tissue flaps that act as one-way inlets of blood on the entry side and one-way outlets on the exit side. Each valve has three flaps, except the mitral valve, which has two flaps.

Heart valves can develop one of two malfunctions (or both): 1) regurgitation, in which the valve does not close completely, causing the blood to flow backward instead of forward through the valve, and 2) stenosis, in which the valve opening becomes narrowed or does not form properly, inhibiting the flow of blood out of the ventricle or atria. The heart is forced to pump blood with increased force to move blood through the stiff, stenotic valve. When heart valves fail to open and close properly, the heart’s ability to pump blood adequately through the body is hampered, causing heart failure.

There is a long history of surgical innovation and technology in the treatment of heart valve disease. Most of this work has focused on the aortic valve and mitral valve, as these are associated with the highest incidence of disease. Aortic valve replacement began in the 1960s with the development of cardiopulmonary bypass. Over the years, minimally invasive techniques have been developed and are offered at both UF Health campuses. A recent advance has been “transcatheter aortic valve replacement,” or “TAVR,” which involves delivering a new tissue valve over a catheter into the aortic valve position. TAVR initially was used in patients thought to be too risky for open heart surgery; clinical trials then showed TAVR was safe for even moderate-risk patients. Clinical trials are now underway at UF Health in Gainesville studying TAVR in low-risk patients — and soon to come is a preventive clinical trial for patients with severe aortic stenosis who do not have any symptoms at all. The field of TAVR is advancing fast. Last year in Gainesville, 180 TAVR procedures were performed, with continued growth expected. At UF Health Jacksonville, 40 TAVR procedures were performed by Dr. John Pirris, an assistant professor of cardiothoracic surgery, Dr. Theodore Bass, a professor of cardiology, and Dr. Daniel Soffer, an associate professor of cardiology.

Mitral regurgitation, which Mr. Kuemmerlein experienced, is leakage of blood backward through the mitral valve each time the left ventricle contracts. A leaking mitral valve creates a situation in which blood flows in two directions during the contraction. Some blood flows from the ventricle through the aortic valve — as it should — and some blood flows back into the atrium. See this link to see an animated video contrasting normal function of the mitral valve with mitral regurgitation. If regurgitation is significant, there may be fluid build-up in the lungs (pulmonary congestion). People with this condition typically experience shortness of breath, and they may also have irregular heartbeats and chest pain.

Mitral valve repair and replacement also started in the 1960s and has advanced to minimally invasive techniques that allow the mitral valve to be repaired or replaced through a small incision in the right side of the chest. Repairing the patient’s own natural valve is always preferred, but rheumatic heart disease often deforms the valve, necessitating replacement.

Surgeons and cardiologists have been working for years on a suitable transcatheter replacement for the mitral valve but it has proved much more challenging due to its oval shape and the fact that the mitral valve can sometimes interfere with the aortic valve.

In recent years, however, a novel minimally invasive technology called “MitraClip” was introduced in which leaky mitral valve flaps can be clipped together under echo imaging guidance to reduce the leak and improve patient symptoms. Clinical trials have shown that younger and healthier patients do better with an actual mitral valve surgical repair, which is now done through a minimally invasive approach. For high-risk patients, however, like Mr. Kuemmerlein, simply improving the amount of mitral valve regurgitation with the minimally invasive clip allows them to return to functional lives — and in Mr. Kuemmerlein’s case go home the morning after the procedure!

Mr. Kuemmerlein reports that “my breathing is easier and I have noticed an increase in my appetite and energy.” His remarkable story highlights the vision of the new UF Health Heart and Vascular Hospital that will open in December 2017. Of the 15 new operating rooms in the new tower, five of them are “hybrid” rooms that have advanced imaging capabilities for minimally invasive procedures. A thoracic room will be equipped with a new robot for minimally invasive lung and esophageal procedures. And the cardiologists’ and heart and vascular surgeons’ clinics are located together to foster the minimally invasive collaborative team-based care that will be a hallmark of cardiovascular care in the 21st century.