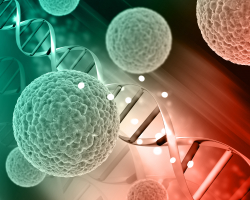 The Epstein-Barr virus is a common, persistent and elusive invader. It typically spreads through saliva during childhood and often goes dormant after infection. The virus, also known as human herpesvirus 4, can cause mononucleosis and several cancers, including fast-growing tumors like Burkitt lymphoma, which is a form of neck and jaw cancer, and cancers in organ transplant recipients.

University of Florida Health researchers Sumita Bhaduri-McIntosh, M.D., Ph.D., and Michael McIntosh, Ph.D., and their collaborators have published new research showing a class of drugs used to treat a limited set of breast and ovarian cancers are also effective against cancers linked to the Epstein-Barr virus when tested on human cells. They also discovered a way to predict the susceptibility of other types of cancer to the anticancer drugs, potentially expanding their use. The findings were published today (Oct. 1) in the journal https://journals.plos.org/plospathogens/article?id=10.1371/journal.ppat.1008849

.Bhaduri-McIntosh is an associate professor in the UF College of Medicine’s departments of pediatrics and molecular genetics and microbiology, chief of pediatric infectious diseases at the nationally recognized UF Health Shands Children’s Hospital, and a member of the UF Health Cancer Center. Here, she discusses the relevance of the group’s findings.

Q: What is known about the relationship between the Epstein-Barr virus and certain cancers?

A: Epstein-Barr virus, or EBV, can cause cancers known as lymphomas of B cells, a type of immune cell. It can cause Burkitt lymphoma in children living in certain parts of Africa. It can also cause lymphomas in those who are on immunosuppressive medications or recipients of organ transplants. Children are more frequently at risk for posttransplant EBV lymphomas.

Q: Your findings show how the Epstein-Barr virus influences DNA repair. What is the significance of that?

A: The class of anticancer drugs known as synthetic lethal drugs targets cells that cannot repair DNA accurately. We found that the Epstein-Barr virus reprograms the cell to turn off the most accurate form of DNA repair known as homologous recombination. This process allows cells to proliferate despite errors and helps the virus persist.

But that also makes these proliferating B cells highly dependent on another form of DNA repair. When that DNA repair is disrupted by synthetic lethal drugs, the cells are killed. We have also learned that EBV uses a common cancer-related cell protein to turn off homologous recombination. Because this cancer-related protein is active in many human cancers, our findings suggest that synthetic lethal drugs may also be active against many cancers not related to EBV.

Q: So, killing cancer cells by stopping them from repairing their damaged DNA may be an effective therapy for EBV-related cancers?

A: DNA repair is important as mutations can also lead to cancer. But in the case of EBV cancers, EBV prevents accurate DNA repair. That leaves the cell with only error-prone mechanisms. This, in turn, makes the EBV cancer cell susceptible to synthetic, lethal anticancer drugs.

Q: How did you establish your findings?

A: We found that EBV turns off an accurate form of DNA repair by activating a gene known as STAT3. STAT3’s function is to turn on thousands of other genes. By comparing anticancer drug sensitivities and the activity of known STAT3 gene targets in over 450 cancer cell lines, we found a set of 11 genes that can predict the susceptibility to the synthetic lethal anticancer drug olaparib.

Q: Can you elaborate on your findings that more types of cancer are likely to respond to treatment with lethal inhibitors?

A: The STAT3 gene is activated in many types of cancer. If this activation inhibits DNA repair in those cancers as it does in EBV cancers, then many other types of cancer may be susceptible to synthetic lethal anticancer drugs.

Q: The findings also indicate that an existing medication (olaparib) may be an effective treatment for EBV-related cancers. What are the implications of that?

A: Right now, there is no antiviral drug for EBV nor any EBV-specific anticancer drugs. Treatment often targets the destruction of all immune cells (known as B cells) whether or not they are EBV-infected. As B cells are important immune cells, such therapies put patients at risk for other life-threatening infections. We hope that future research will lead to the expanded use of olaparib and/or other synthetic lethal anticancer drugs to treat not only EBV-related cancers but also other cancers.

Q: What is next for this research?

A: We hope to develop a test to predict the susceptibility of different cancers to synthetic, lethal drugs so that medications such as olaparib might benefit more patients beyond those with breast and ovarian cancers. We also plan to continue researching the mechanisms by which EBV reprograms the human cell to learn more about the virus and discover fundamental mechanisms that govern our own biology.

Doug Bennett joined the UF Health staff in January 2015 as a science writer and editor. His topic areas include anatomy; biochemistry and molecular biology; molecular genetics and microbiology; pathology,... END_OF_DOCUMENT_TOKEN_TO_BE_REPLACED