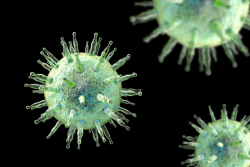 on by their hosts’ immune system. Now, University of Florida researcher Sumita Bhaduri-McIntosh, M.D., Ph.D., and her graduate student Eric M. Burton have discovered how the common, cancer-causing Epstein-Barr virus does just that by using a complex of proteins to emerge from a dormant state and begin replicating.

An associate professor in the UF College of Medicine’s departments of pediatrics and molecular genetics and microbiology and chief of pediatric infectious diseases at UF Health Shands Children’s Hospital, Bhaduri-McIntosh focuses on cancer development and progression involving the Epstein-Barr virus and its host. The findings were published Jan. 9 in the Proceedings of the National Academy of Sciences. Co-authors include Bhaduri-McIntosh’s former graduate student Eric M. Burton, Ph.D., and Raphaela Goldbach-Mansky, M.D., a senior investigator for the National Institutes of Health.

The research was supported by grants from the National Institutes of Health and the University of Florida. Here, Bhaduri-McIntosh , also a member of the UF Health Cancer Center, explains more about the findings.

What is the Epstein-Barr virus? 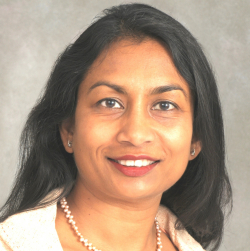 The Epstein-Barr virus, or EBV — also called human herpesvirus 4 — affects more than 95% of the world’s population, according to the National Institutes of Health. Usually spread during childhood through saliva, the virus typically produces a primary infection without symptoms followed by dormancy. It can cause mononucleosis, post-transplant lymphomas, Burkitt lymphoma and nasopharyngeal cell carcinomas, and has been associated with gastric and other cancers. Once a patient is infected, EBV remains for life, usually in a dormant state.

What did you investigate during this research?

Viruses activate a complex of proteins, known as inflammasomes, but then undermine the resulting inflammatory responses that would otherwise eliminate them. We asked if viruses could instead be using those activated inflammasomes to directly aid their replication and spread.

What are your primary findings?

Our experiments revealed that the Epstein-Barr virus exploits several inflammasome sensors to activate and propagate itself, leaving when the cell perceives internal or external threats. This helps to explain the mechanics of how the virus is able to persist and reactivate. This is also the first known instance of a virus able to exploit inflammasomes directly for their replication.

What is the relevance for human patients?

The inflammasome is activated by metabolic changes in the cell and various inflammatory conditions such as infections, injuries and inflammatory diseases, including diabetes. We have found that a particular inflammasome that is activated by high blood glucose (diabetes) also causes replication and increased production of infectious Epstein-Barr virus. This increased cycle of activity is important for the development of EBV-related diseases such as infectious mononucleosis and EBV-related cancers. Our findings are also relevant to a group of patients who have a genetic condition called neonatal onset multisystem inflammatory disease, or NOMID, which is caused by a genetic mutation. With the inflammasome being hyperactive in such patients, our experiments indicate that a particular type of white blood cell may be less likely to control Epstein-Barr virus replication in those patients.

How does increased Epstein-Barr virus activity potentially lead to cancer?

Do these findings apply to other viruses?

How were the experiments conducted?

What is next for this research?

The relationship between Epstein-Barr virus, high blood sugar and EBV-related cancer development warrants further investigation. Furthermore, for the first time, our discovery enables prediction of which EBV-infected cells will support the virus’ productive phase. By identifying and isolating such cells in which EBV is poised to begin replication, we aim to pinpoint molecular targets for anti-EBV therapies. There are currently no drugs or vaccines to prevent or treat EBV-mediated diseases.

Doug Bennett joined the UF Health staff in January 2015 as a science writer and editor. His topic areas include anatomy; biochemistry and molecular biology; molecular genetics and microbiology; pathology,... END_OF_DOCUMENT_TOKEN_TO_BE_REPLACED