The best way to prevent the spread of COVID-19 is to get vaccinated. You can get a vaccine in many places in your community. Find a walk-up location or schedule an appointment today. END_OF_DOCUMENT_TOKEN_TO_BE_REPLACED

Sinusitis is present when the tissue lining the sinuses become swollen or inflamed. It occurs as the result of an inflammatory reaction or an infection from a virus, bacteria, or fungus.

The sinuses are air-filled spaces in the skull. They are located behind the forehead, nasal bones, cheeks, and eyes. Healthy sinuses contain no bacteria or other germs. Most of the time, mucus is able to drain out and air is able to flow through the sinuses. 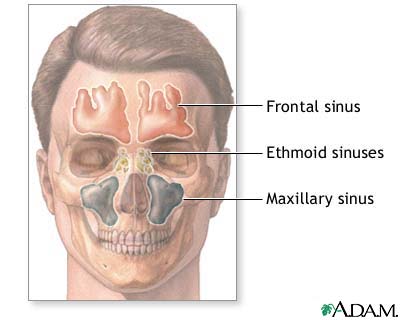 When the sinus openings become blocked or too much mucus builds up, bacteria and other germs can grow more easily.

Sinusitis can occur from one of these conditions: There are three types of sinusitis:

The following may increase the risk that an adult or child will develop sinusitis:

The symptoms of acute sinusitis in adults very often follow a cold that does not get better or that gets worse after 7 to 10 days. Symptoms include:

Symptoms of chronic sinusitis are the same as those of acute sinusitis. However, the symptoms tend to be milder and last longer than 12 weeks.

Symptoms of sinusitis in children include:

The health care provider will examine you or your child for sinusitis by:

The provider may view the sinuses through a fiberoptic scope (called nasal endoscopy or rhinoscopy) to diagnose sinusitis. This is often done by doctors who specialize in ear, nose, and throat problems (ENTs).

Imaging tests that may be used to decide on treatment are:

Most of the time, regular x-rays of the sinuses do not diagnose sinusitis well.

If you or your child has sinusitis that does not go away or keeps returning, other tests may include:

Try the following steps to reduce stuffiness in your sinuses:

Be careful with use of over-the-counter spray nasal decongestants such as oxymetazoline (Afrin) or neosynephrine. They may help at first, but using them for more than 3 to 5 days can make nasal stuffiness worse and lead to dependence.

MEDICINE AND OTHER TREATMENTS

Most of the time, antibiotics are not needed for acute sinusitis. Most of these infections go away on their own. Even when antibiotics do help, they may only slightly reduce the time it takes for the infection to go away. Antibiotics are more likely to be prescribed sooner for:

At some point, your provider will consider:

Other treatments for sinusitis include:

Surgery to enlarge the sinus opening and drain the sinuses may also be needed. You may consider this procedure if:

Most fungal sinus infections need surgery. Surgery to repair a deviated septum or nasal polyps may prevent the condition from returning.

Most sinus infections can be cured with self-care measures and medical treatment. If you are having repeated attacks, you should be checked for causes such as nasal polyps or other problems, such as allergies.

Although very rare, complications may include:

A green or yellow discharge does not mean that you definitely have a sinus infection or need antibiotics.

The best way to prevent sinusitis is to avoid colds and flu or treat problems quickly.

Other tips for preventing sinusitis: