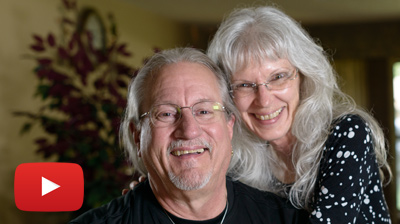 Greyhounds are loving and gentile creatures; full of energy. They need owners who can keep up with them, and that’s exactly what Lori Gilstrap and her husband, Tommy, have been doing for years –keeping up with rescued greyhounds. In 2011, Lori’s sudden and unexplained exhaustion kept her from doing this and many other things she enjoys. After finally being diagnosed with a rare vein disease, UF Health was able to give Lori her energy back so she could get back to doing what she loves most.

Many people were involved in Lori’s care and impacted by her situation. In this photo gallery, you can see she, her husband and Elkie doing what they love most, spending time together. 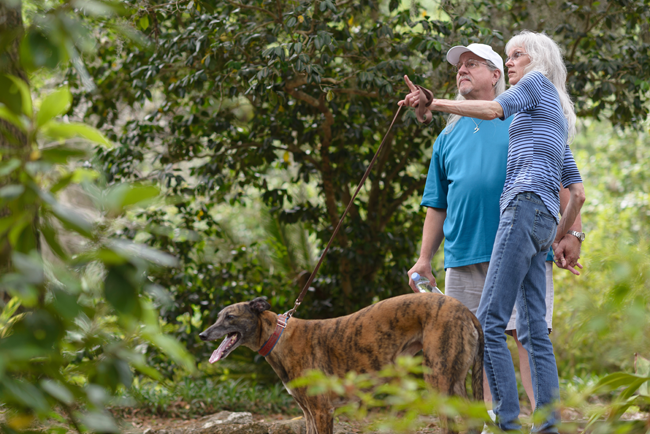 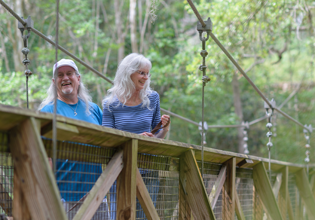 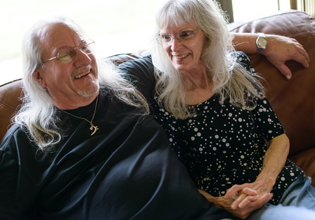 “When UF Health told me they could fix me, it was like 1,000 pounds got lifted off my shoulders."

Treatment of rare disease gave Lori Gilstrap her life back. 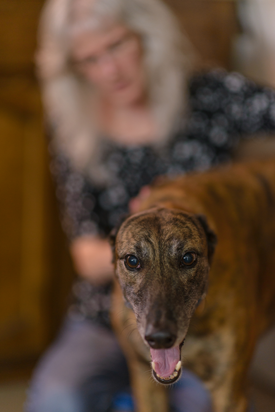 For two years starting in October 2011, Lori Gilstrap knew something was very wrong with her health. She was experiencing large amounts of blood loss, as well as constant exhaustion.

“I’m on my feet all day in my job, and people said they could not believe that I was even up and walking,” Lori recalled. “On the weekends, I crashed. I sat in my chair and didn’t do anything. I was just so weak, and oh — the fatigue — it was horrible.”

Lori’s husband, Tommy, provided all the moral support he could, but says that didn’t help with her physical problem. “I personally don’t know how she got through,” Tommy recalls.

After seeing many different doctors in her hometown of Orange Park, Florida, Lori eventually received a diagnosis: nutcracker syndrome. This rarely diagnosed condition occurs when the renal vein, which drains blood from the kidney, is compressed between the aorta and the artery that supplies the intestines with blood. In severe cases, the vein collapses. Blood that should flow out of the kidney and back to the heart instead backs up into the kidney and comes out in the urine.

“All of my life, these two arteries have pounded on this vein and eventually they just collapsed,” Lori explained.

As a very slender person, she does not have much fat in her abdomen to help cushion the vein.

Lori was relieved to finally have a diagnosis, but began to feel lost again when she saw several vascular surgeons who said they would not operate on her for one reason or another. Finally UF Health said yes.

“When UF Health told me they could fix me, it was like 1,000 pounds got lifted off my shoulders.” Lori recalled. “I could breath again. I knew I was going to be okay.”

Lori initially met with Thomas Huber, M.D., Ph.D., chief of vascular surgery and endovascular therapy at UF Health, who brought the case to his team for review. During a weekly meeting, Dr. Huber and his team decided that associate professor in the division, Robert Feezor, M.D., would be best to perform her surgery, as he had treated nutcracker syndrome once previously.

Dr. Feezor opted for a minimally invasive approach first, which works for some patients. Ultimately, because of the severity of Lori’s condition, she required a renal vein bypass. He took a portion of vein from Lori’s leg and attached both ends of it to the renal vein, creating a path for blood to flow around the problem area between the two arteries. The surgery took place in October 2013, more than two years after her symptoms began.

Since surgery, Lori has returned to horseback riding, a favorite activity made difficult by the fatigue accompanying her illness, and one she gave up temporarily after surgery. She is also back to spending more time with Tommy and Elkie at the beach and local parks.

Lori is glad to have moved past nutcracker syndrome and on with her life, and says she is grateful for the very personal, high-quality care she received at UF Health. “I can’t say enough good things about Dr. Feezor, the ICU staff, the clinic.” she said. “UF Health gave me my life back.” 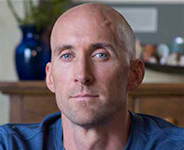